Villa Leoni dominates the lake from an elevated position, which allows a suggestive view of the surrounding area. The building fits into the context with a square plan, marked by the rhythm of the load-bearing walls, placed at 4.20 meters from each other which allow great freedom in the organisation of the interior spaces and become the model used for the distribution of the environments. The south-eastern orientation and the presence of the lake are external conditions to which Lingeri responds with a wise distribution of housing functions, aimed at ensuring maximum climatic comfort and relating the interior with the landscape. The solid walls made of Moltrasio stone, chosen among the materials granted under the regime of autarchy, which refer to the vernacular tradition of the lake, open with large windows in the living area and in the owners' bedrooms. The project is completed by the patio, closed at the back by the villa and which acts as a connecting element between exterior and interior, following the dominant lines. The horizontal lines supporting the solarium recall the existing scan, and the vertical lines, represented by the pillars, are a lightening of the wall partitions. The rigorous, dynamic layout is enriched by the chromatic choices of the cladding: the main façade in stucco in eggshell colour, the patio beams painted in salmon pink and the olive green of the outer doors and windows, in fir wood. The black and white marble floors blend with walls in soft tones. 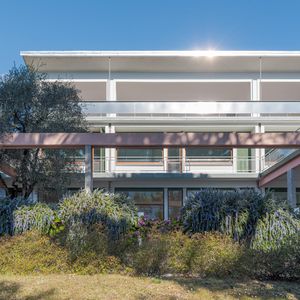 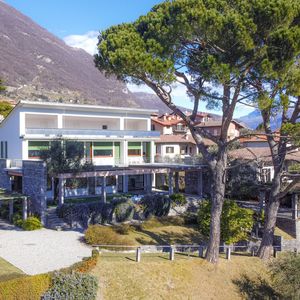 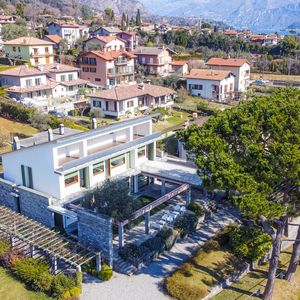 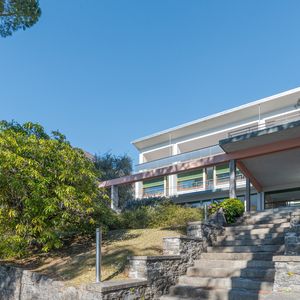