The houses for artists designed by Lingeri, built in 1940, complete a project begun at the behest of the Brera Academy in 1920, the year in which the island on which they stand was donated to the Italian State by the King of Belgium. After a competition in 1921 with unsatisfactory results and a new relaunch five years later, it was decided to entrust the work to Pietro Lingeri. The architect rescaled the original project, which was to include communal areas and a hotel to develop instead three housing modules inspired by the holiday house that Le Corbusier had built in 1935 in Los Mathes, France. The houses, which had to host Italian and Belgian artists for short stays, consist of a ground floor with a living area, a sleeping area on the upper floor and a double-height studio. The project is oriented towards maximum dialogue between the buildings and the suggestive surrounding environment, as well as making elements of vernacular architecture coexist with rationalist styles. The artists’ residences fit perfectly into their surroundings thanks to their small size, their symbiotic relationship with the outside and the use of traditional materials such as Moltrasio stone for the load-bearing walls and wood for the stairs, windows and roof framework. Arranged along the heliothermic axis, the houses make the most of the light from the outside, which passes through the glass block walls of the north façades and hits the inner plastered stone walls. 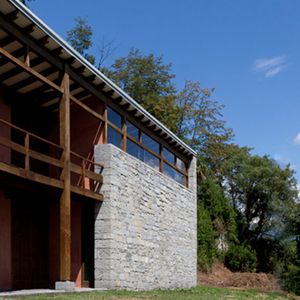 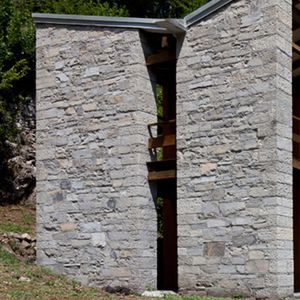