The building, planned to celebrate the anniversary of the società Canottieri (Rowing club), was built within an area, not far from the historic centre and facing the lake, which had been identified as the site of sports facilities. The stadium, the swimming pool, the seaplane base and the Yacht Club were also located in this area. Mantero was asked to complete the preliminary study already carried out by the Swiss architect Boedeker, who had been involved in designing other buildings with the same function. The result is a building that fits carefully into its context, in a symbiotic relationship with the lake, which is not only the setting but the stage for the activities that take place in the site. Inside, the functions are distributed among the different levels: on the first floor there is the entrance-bar with its glass windows overlooking the lake and the mountain as well as the service rooms. The upper floor houses the administration and shareholders' areas. Training rooms and an outdoor pool complete the facility. The interiors are characterised by a clever use of space to ensure maximum efficiency, the reinforced concrete structure ensures adaptability, and the brick walls have ribbon windows in an upper band to provide light. The concrete trampoline completes the rigorous construction, emphasising the connection between the building and the lake. 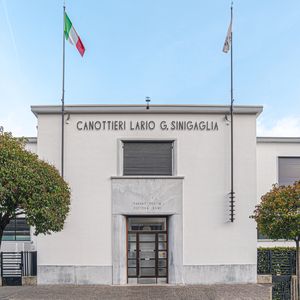